“Let’s watch The Time Machine,” I’ve been encouraging H.o.p. for a couple of weeks, and he always declined, intent instead on working on his projects, not wanting to be distracted despite the fact it was directed by animator and special effects artist (hero) George Pal. Which surprised me as he loved Pal’s “War of the Worlds” and even did a short claymation several years ago attempting to copy a scene of a Martian emerging from his spacecraft.

Today, I finally just started the movie up and, as it turned out, the intro music was enough to catch his attention.

“Wow, I love the music,” he said, leaving his computer and shuffling over to mine as I was playing the movie on Netflix streaming.

I was curious what his response would be to “The Time Machine”, and how my memory of the movie would hold up as I’ve not had a full viewing of it since I was a child. The scene that had remained with me all these years was when the blond Eloi, sirens blaring, had become as somnambulists and walked en masse to certain doom through the mysterious sliding door of the Morlock den.

That memory which stayed with me was as if I’d not seen the movie past that point, for its chill was wholly concerned with the drone-like submission to the blank, black future beyond that door, as if I’d not ever learned what the Morlocks looked like (pretty cheesy, as were the Eloi in their bad blond wigs), never learned the end of the film. But I had seen the entire movie and the little that stuck with me of its resolution was again unsettled emotion, the unease of no certain outcome.

H.o.p. had seen, when he was seven or eight, clips from the movie so that he knew already about the Morlocks, a good deal of suspense thus absent from his viewing, and it was on these he focused as being rather frightening with their bright, shiny eyes, but not too much so, just enough to be kind of scarily enjoyable.

As I watched the film and we reached the stage where The Traveler begins his journey, I recollected the spinning orb of the sun and the mannequin who shows the passing of time with the change of attire in the shop window of the narrator’s store, Filby’s, across the street from The Traveler’s window.

But for me, as a child, the opening meeting of The Traveler’s peers at his home on New Year’s Eve must have been purely extraneous and I’d no recollection of it at all, nor did I have any recollection of The Traveler first exiting his Time Machine to encounter who he believes is Filby before the department store which is, incidentally, located next a clock repair shop. Remarking on the absence of his mustache he instead learns this is Filby’s son James, and that the elder Filby had died in the war the year before.

The position of the store in relation to The Traveler’s home is important, as is the red-haired Filby’s friendship with the doctor. The movie opens with Filby closing his shop and crossing the street to The Traveler’s house. The Traveler’s draw to focus upon this shop and its mannequin during his initial leaps through time is strong enough that when he returns to his time machine, so he may have again a clear view of the window he removes boards that had been apparently placed over his home’s windows following the elder Filby’s death. 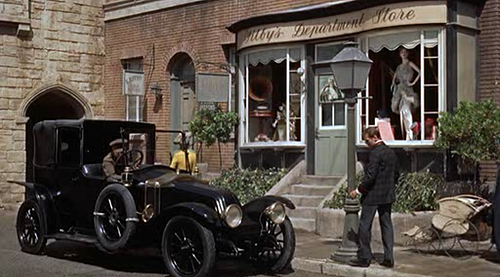 Advancing to 1966, The Traveler finds the street in a commotion, people rushing to underground shelters, and his house is gone, replaced by a garden dedicated to elder Filby’s devotion to him.

Here we see The Traveler passing by a new flat screen “tubeless tv” just prior to meeting James Filby a second time. He also examines a sidewalk display of battery-powered razors with which he briefly shaves, an odd touch considering the destruction of the city directly follows.

Despite growing up during the Cold War near Hanford, where the plutonium bomb was born, I’d no memory of the 1966 atomic warfare scene in which The Traveler encounters again Filby’s son, now quite old, who is also fleeing to the air raid shelters. Though we see that Filby’s has become a large department store, James exits the same small shop his father had kept which has been preserved next the much larger, new store, and in the window of the older store is still the mannequin, and on the door of the shop is a newer version of a Red Cross poster, there also having been one on the shop’s door during the WWI scene. The Traveler, unaware what the air raid sirens mean, enthusiastic about the amazing progress that civilization has made, entreats Filby to stay and talk with him, Filby warning him that the sirens are for silly youngsters like himself who don’t know any better than to take cover, which refers to the future in which the underground Morlocks take care of the Eloi who have lost the ability to tend to their own needs or think for themselves.

Time and again Filby, then his son, attempt to divert The Traveler from his enterprise with friendly or concerned gestures, which The Traveler always turns away.

The apocalyptic special effects accompanying that portion of the film–the earth unleashing its fury in response to atomic warfare, volcanic lava flooding streets and moving about toy cars–seemed out of place with the movie on the whole and the subtler yet more impressive effects used elsewhere.

Some of the more impressive displays in the movie we see only briefly, such as the domed building in the land of the Eloi, the twin sphinxes guarding, and a pyramid shaped structure in the background.

Though I enjoyed his acting, Rod Taylor amongst the Eloi unrolled as a rather weary romantic adventure, perhaps the excuse for the film’s existence considering that Wells’ elfin Weena was transformed into a nubile Yvette Mimieux, and I thought it curious that none of the battle and rescue scenes had stuck with me, instead only the Eloi’s spellbound, conscious-less march through the dark door.

Following the end, I read a few reviews from the time remarking on the film’s hollowness and that the ending was far rosier than Wells had depicted, but I instead understood how as a child I would have comprehended the end as so ambiguous that I’d keep no solid recollection of it.

Then I looked up the book online and finally gave it a quick read, which is easy to do as it’s pretty plainly told and not too long. I read of the entry to the underground world of the Morlocks’ watched over by the White Sphinx, the smile of which first appears friendly to The Traveler and later malicious and taunting, and how when The Traveler returns his heel is hurting him, both obvious references to the tale of Oedipus who is unable to alter fate, which every high school student is going to know who has had to study the book for a class and has referred online for canned notes for an essay.

The idea of this sphinx standing upon the pedestal above the entry to the Morlock’s underground world isn’t so obvious in the film, reduced to only a head, and because this head is glimpsed only briefly the viewer isn’t given much of an opportunity to decipher the environment.

Then I thought of Pal’s mannequin, the one in Filby’s shop window, which so captures The Traveler’s attention, of how she had been curious to me as it would have been impossible that she remained in that shop window for decades, of how it had been curious to me that Pal so focused upon her, even having The Traveler remark upon how he felt they were alike as they never aged. And it occurred to me that, for Pal, the mannequin upon whom The Traveler has had his eyes set since the beginning of his journey is a representation of the White Sphinx.

No sooner does The Traveler comment on his fondness of the mannequin and how neither of them age than Pal inserts a brief clip of the growth of several rosy red apples upon a tree limb, bringing to mind the fabled Garden of Eden, linking into The Traveler’s later conviction, upon reaching the world of the Eloi, that he has found paradise, where all needs are provided for and also none of the Eloi (whom Wells has cast as deity-like with that name) grow into later maturity and old age…because the Morlocks consume them.

One may even glimpse in Pal’s combination of the chariot and sphinx (perhaps even in Wells’) a version of the Chariot card of the tarot in which dual white and black sphinxes lead a chariot.

Wells takes The Traveler far far into the future, into a world where humanity as we know it no longer exists, where the White Sphinx may be perhaps glimpsed briefly as a winged thing screeching mournfully in the sky while The Traveler is beset upon by giant crabs. Then even further into the future still to the close of the world.

Pal refrains from this and instead casts The Traveler as a sort of serpent in the garden, a helper whose conviction is that the best thing for the Eloi is to awaken them, destroying the world of the Morlocks, forcing the Eloi into a position of thinking and taking care of themselves.

Though he had sought peace and paradise, had been horrified by war and attempted to flee it by venturing into the future, in his determination to assist the Eloi, as a means of introducing them to free will and waking them from thoughtless submission, The Traveler brings conflict and battle to their world. He acts as a Promethean light-bearer with his fire, a thing with which the Eloi were unacquainted until his arrival.

Having returned to his friends in 1900 and then leaving again, The Traveler is noted as having taken with him three books, Filby and the maid servant building a romantic story that certainly The Traveler has returned with those books to where he’d left Weena so that he may help the Eloi build a new world.

We are deprived of seeing whether or not he has returned.

“Do you think it could have caused a time paradox, him telling everyone about the future?” H.o.p. asks.