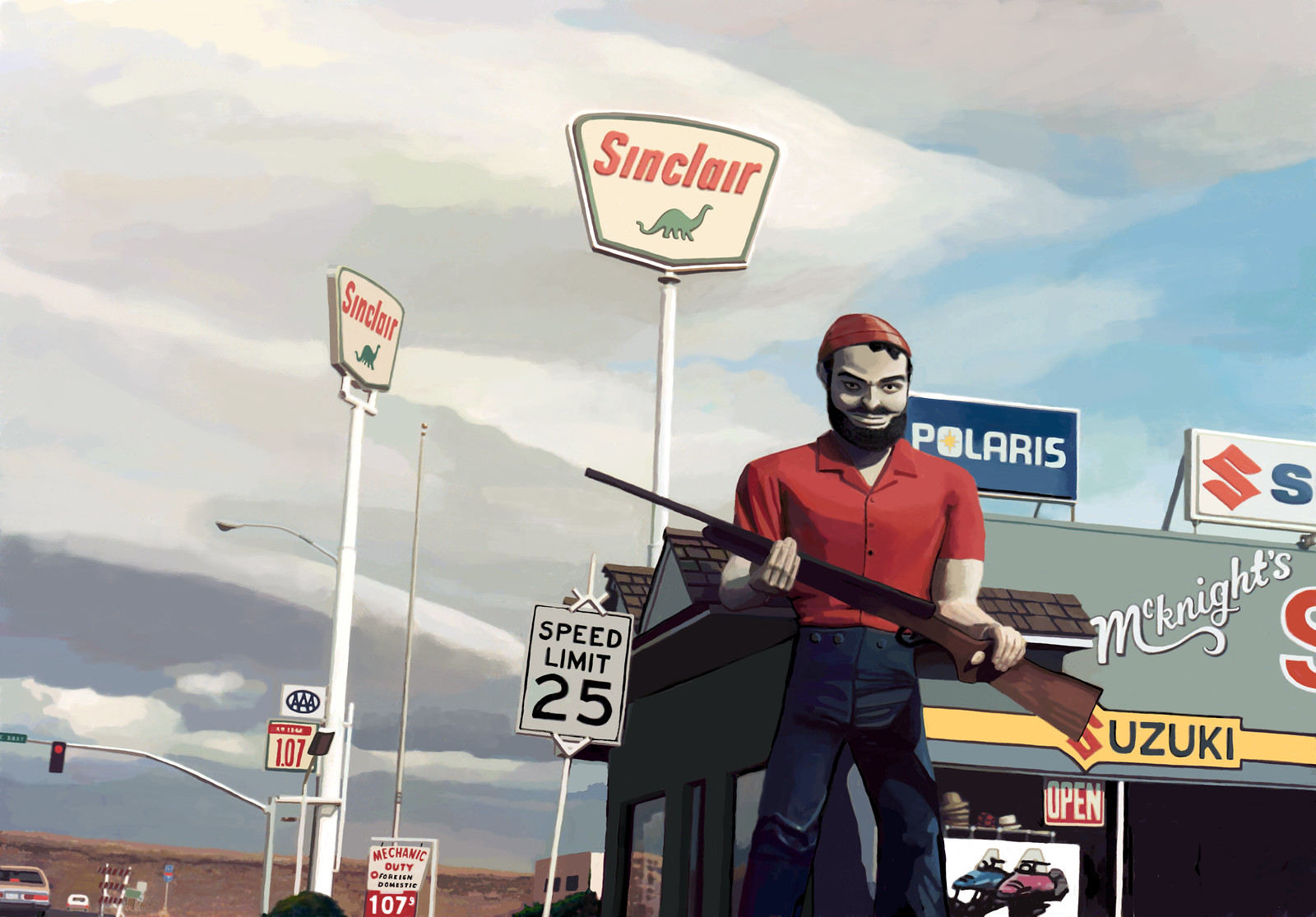 This muffler man used to stand at 968 E St George Blvd. in St. George, Utah. When I took the photo (which I later used as reference for the digital painting), it was in the area of 1991, maybe a little earlier, and he was beside McKnight's Sporting Goods, a Sinclair gas station beyond, that's all we would know of this landmark for years, that it was paired with McKnight's and a Sinclair station. We didn't live in the area, the photo was taken during a cross country trip, and we later became convinced that we had seen this muffler man up in the northwest. I was only able to finally identify him by happening on a Jan 2022 FB post by Wilbury Tees on a t-shirt that was made to commemorate this Bunyan's once standing in St. George, and I immediately knew that was the one I'd taken the photo of and done the painting of because we'd been through St. George on the trip and the t-shirt had him carrying the rifle. Thus I was able to find him on the American Giants website, and on Roadside America, which shows someone else's photo of him from the late 1980s with the rifle and the Sinclair station beyond. He was known, during those Utah years, it seems, as Big John.

I believe these statues were originally crafted so they carried axes but this Paul Bunyan's ax was replaced with a gun. When did that happen. Did it have to do with McKnight's Sporting Goods?

In 2006 I wrote the following on the painting:

What I reflected on while working on Paul Bunyan in 2005, having prepped to do it by reading my son, H.o.p., the tall tales, was several parts the fiberglass sales attraction, the big draw on the horizon, and several parts Bunyan ripping through the land, tearing up trees, clearing the way West, the European occupation of the continent tied up with the near worship of the subduing of nature.

Paul Bunyan may have started out as French Canadian lore to do with real people--maybe Bon Jean who fought against the British Queen in the Papineau Rebellion of 1837, or maybe it was Fabian Fournier, a big lumberjack who went down to Michigan from Canada and was murdered in 1875--but when I was a child, the tales of Paul Bunyan in school were only related to impart the BIGNESS of everything that was found in America, and the BIGNESS of Christian European determination to occupy that bigness, though no one called it occupation, instead it was all land improvements, like a giant real estate venture. The determination to occupy and tame that American bigness became almost mystical with visions of second-wave settlers driving their wagons through hills and mountains already nearly conquered for them by the voracious hunger of Paul Bunyan's gigantic ax, which retained a peculiar French accent that let an American school child know something wasn't quite right with the story as it was being told. Paul was not only the twilight bridge between the "beast" and "civilization", he represented the notion of divine right; the initiatory human actions of settlement, of occupation, clearing the land, becoming in themselves a sacred stealth authorization making treaties null and void. For which reason when I read the tales to my son I felt it was time to talk about what that gigantic, plundering ax and showed H.o.p. also graphics of the reach of forest several hundred years ago as opposed to today.

Paul Bunyan's favorite thing to do is clear whole mountain tops of trees in one fell sweep.

Which meant of course I showed my son pictures of clearcutting and we talked about that for a while.

"But trees are the lungs of the earth," he. said, like there was no one who shouldn't understand this.

"Why did they give Paul Bunyan a gun?" he asked.

Paul Bunyan was popularized in the 1900s by the Red River Logging Company, a sales scheme, but he entered the schools as tales for swaddling, well, the children of Manifest Destiny and letting them know it was all A-OK.

To me this leads right up to the present and I thought about it while working on this painting based on a 90s photo of a figure that became a successful ad campaign clearing the consciences of the children of Manifest Destiny. I don't know how successful a campaign it was for the Red River Logging Company, but several generations of school children were so indoctrinated with the tales of Bunyan that I imagine there are adults raised on tales of Paul Bunyan who would say it would be near illiteracy to not regale children with them now.

The original photo is below, at least a scan I made of it in 2006. The original should be around here somewhere.

Return to this gallery's index
Return to Art Galleries